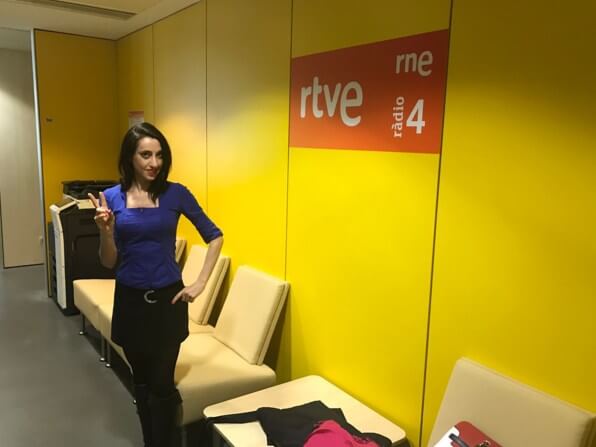 Barbara Beatrice Lavitola, managing director at BBLTRANSLATION, was a part of Ràdio4 RNE´s Amics i coneguts programme on Saturday 4th February. It had just so happened that Silvia Tarragona, the programme director, and Barbara had met one day on a bus in Barcelona and agreed to an interview to chat about English, phonetics and the radio business.

BBLSAUND® is a project of the translation and interpreting agency BBLTranslation, and comprises a set of six classes working to answer one of the greatest questions of those who speak English as a foreign language: why, after so many years of studying the English language, are there still so many people who have difficulty speaking and understanding oral English?

The problem gets even worse when this lack of confidence becomes apparent among the managers and sales teams of many international companies. “We do a lot of work in business environments and cannot understand why there are business managers and directors who use English on a daily basis, after having studied it for many years, but lack confidence when it comes to speaking the language”, Barbara said.
“These are not conventional English classes, but a specialised workshop for those who want to take a step forward in improving their pronunciation and aural comprehension. Our agency has been a pioneer in investigating and providing a practical solution to the fact that most people study English, but can’t speak it properly. Nowadays, use of English is essential in the world of business and it’s no secret that there is a certain fear and blockage that exists when it comes to oral expression”.

That is why BBLTRANSLATION is a pioneer in launching its English pronunciation workshop addressed to Spanish and Catalan businesspeople. In a few sessions and with the guidance of university professors who specialise in English phonetics and philology, students will gain confidence and improve their pronunciation and listening comprehension of the English language.

“If I am presenting my company and my services without expressing myself properly, without feeling comfortable with the language I am speaking, how can others have confidence in what I am trying to sell them?” Barbara said during the programme. “Thus, there is a visible lack of prestige which undoubtedly affects the image of the professional in question.”

As an expert in the linguistic sector, as well as a translator and interpreter, Barbara is bringing the root of this widespread problem to light: “The English alphabet needs to be taught in the same way as the Chinese and Arabic ones – for example, explaining the sound of each letter and how they sound with different vowels, at the beginning of a sentence, in the middle, or at the end.”

“What we need to do is teach the root, the pronunciation. Who has ever explained that the vowel ‘a’ can be pronounced in nine different ways? Nobody. We need this confidence, and we would achieve it with a proper understanding of how the phonemes sound.” Barbara explains.

In fact, English is a very easy language when it comes to grammar, but very complicated at pronunciation level, mostly because it doesn’t really follow any set rules.

Barbara has opened up the facilities at BBLTranslation (situated on Calle Balmes/Diagonal) to professionals who want to get out of the office and take part in the workshop, and it is also possible for clients to take the classes at their own offices, with the Learn@Work option. During the interview, BBLTranslation’s manager shared one of the key principles of the workshop: “The first word we must never use is “embarrassment”, and with these classes we will replace it with “confidence” and “excellence””.

You can listen to the full Ràdio4 RNE interview with Barbara Beatrice Lavitola here, starting at minute 30 of the programme.