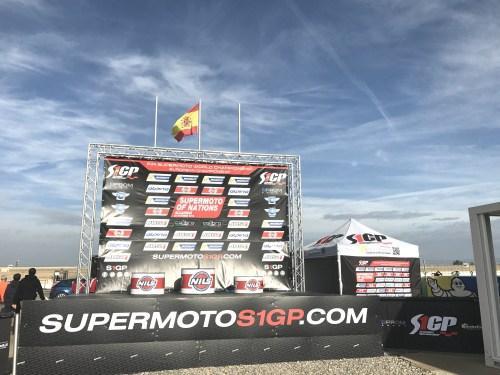 Last weekend, on the 22nd and 23rd October 2016, the Circuito de Alcarrás hosted the FIM SuperMoto of Nations, with 14 countries participating in the championship.
Champions from countries all over the world came together in Spain and the event was a resounding success, representing without a doubt an important boost for this sport in Spain.
BBLTranslation was once again present at an important motorsports event and had the pleasure of translating the interview by the International Union for the Defense of Rights of the Motorcyclist, led by Juan Carlos Toribio, of Supermotard world champion Thomas Chareyre. The interview was carried out in Italian given that the French rider speaks the language very well, and was later translated into Spanish for Digital Fraga TV, Fraga’s local television channel.

France definitely established its supremacy by taking victory at Alcarrás, followed by the Czech Republic and Germany. The Spanish participants in the senior level category, David Giménez, Joan Lladós and Francesc Cucharrera, achieved a commendable seventh place.
The good news for Spanish fans is that in the junior category, Ferrán Cardús, Gerard Bailo and Oriol Peris came away as World Champions after the race on the Lleida circuit.
BBLTranslation has significant involvement with the world of motorsports, having provided various translation and interpretation services within the field as well as collaborating with competitions and circuits in Spain.