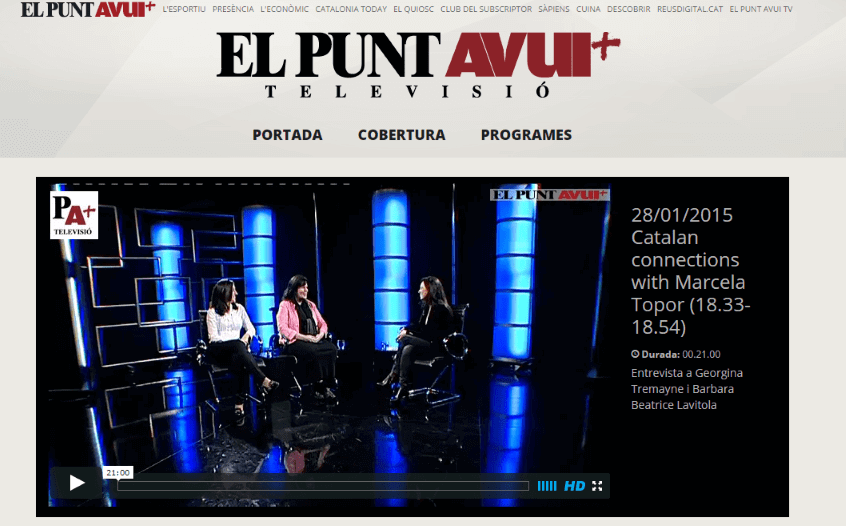 This week, El Punt Avui TV’s ‘L’hora d’Anglès’ programme (English hour) is publishing an interview with Barbara Beatrice Lavitola, manager of BBLTranslation, talking about the main services offered by her leading Barcelona-based company, and the key to its success.

Nicole Millar introduced Barbara to the audience so that they could get to know a little more about the BBLTranslation founder’s past in Milan, where from a young age she had a special interest in languages. After having completed her studies in translation in London, she followed her passion and created the translation agency in Barcelona.

During the interview, Barbara Beatrice Lavitola talked about the company’s origins and the type of professionals she wanted to work with from the beginning: “We attracted lawyers, financial analysts and specialists to collaborate with the company. These people aren’t just translators, they’re experts. This was one of the keys to the company’s success: translating specialised texts.”

Setting up the business in Barcelona was Barbara’s own idea: “I decided to come here from Milan because I wanted to live in Barcelona, and because Spain offered more advantages in terms of business”, she said. In a way, the international context of BBLTranslation means that it can operate absolutely anywhere: “We are an international business, the location is irrelevant. Now, thanks to the internet, we can reach everywhere.”

When we look more closely at the type of professionals BBLTranslation works with, Barbara is proud to be completely satisfied with the team: “We translate many languages because we have a great range of collaborators specializing in finance, law or, for example, theme parks, where we have a large amount of experience in translating documents of various languages. We also work with copywriters, marketing professionals and different kinds of experts who devote themselves to translation, and this is something that companies value very positively.”

The interview also dealt with the importance of translation for businesses, something about which Barbara Beatrice Lavitola showed her most critical and assertive side: “Many people want to save money on translation because they don’t realise its importance. They think that anyone can do a decent translation of a document. Unfortunately, the profession of being a translator isn’t as well appreciated as it should be.”

When asked about bad translations, even for things such as restaurant menus, Barbara was clear: “It really frustrates me to see a bad translation, given that it really doesn’t cost that much if the work is billed per word. If you only need to translate a few words or sentences, I don’t understand this desire to save money.”

Also, Nicole Millar asked about an initiative that really grabbed her attention: BBLWings. Barbara explained “It’s a page we created to show bad translations to the public and how big companies can make mistakes, like spelling “wellcome” with a double ‘l’, for example. In these cases it’s not a question of money, rather that they don’t appreciate the importance of a good translation. In addition, this casts a negative light on the companies. With this initiative, users send us photos of bad translations and we award prizes to the best submissions (or rather, the worst).”

Then, Millar enquired about one of the services BBLTranslation is most proud to offer: BBLsaund®. “It’s a workshop for professionals who want to learn English. Not one English school teaches how the letters should be pronounced. The most complicated aspect of the language isn’t the grammar, but the pronunciation. If we don’t know that the letter ‘a’ can be pronounced in 9 different ways, and we don’t notice this when someone speaks, we have no hope of being able to reproduce this ourselves. It’s a lack of confidence and prestige. If you’re a business professional, you cannot mispronounce words. Schools don’t teach phonetics, and that is why we can spend many years studying English only to then realise that we aren’t pronouncing it properly.”
Barbara also talked about the profile of professionals who attend BBLsaund®: “We teach phonetics to businesspeople who wish to improve their English for their professional development. We have a teacher who is specialised in phonetics and, specifically, English phonetics adapted for Spanish and Catalan speaking professionals.”

Regarding the format of the workshop, Barbara explained that there were “two versions, one in which we give classes in our offices (in-house), and another where we visit the client’s office (learn at work). The workshop is comprised of 6 sessions. It is a short but very useful course which teaches us what we should have learnt before studying grammar or orthography. In this sense, English should be taught like Chinese or Arabic.”

To finalise, Millar didn’t want to miss the opportunity to mention Barbara’s other project Empresarios Bikers, whose origins were explained by the BBLTranslation founder: “When I bought my motorbike, I noticed just how many businesspeople and executives also had them and I thought it would be interesting to bring together professionals who shared this passion.”

Barbara Beatrice Lavitola’s sting on El Punt Avui TV’s l’Hora d’Anglès has served as a perfect overview of her journey to becoming the manager of BBLTranslation, as well as all of the other services and projects of the company, which always pushes for the best quality and specialisation in its translations, making the most of the most advanced technology.