BBLTranslation takes part in the Euro Attractions Show 2016 in Barcelona, strengthening its commitment to the leisure and attractions industry 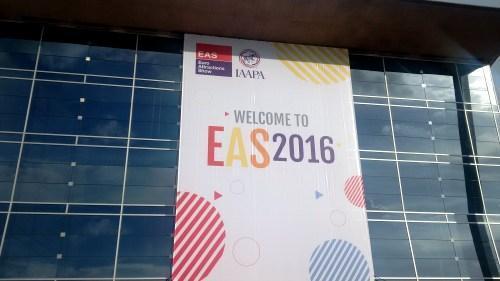 BBLTranslation, a member of The International Association of Amusement Parks and Attractions, participated in the Euro Attractions Show (EAS) which was held from the 18th to 22nd September in Barcelona, the home of our translation and interpretation agency.
For the second year running, BBLTranslation participated in an event organised by the IAAPA. Last time, BBLTranslation flew to Orlando to attend but this year we were able to stay on home turf. The Euro Attractions Show has become a key event which our company, specialising in translations in the theme-park sector, simply could not miss. As well as discovering the new developments in this distinctive industry first-hand, we were able to bring added value to our company and greatly improve our expertise and knowledge in the field by attending various workshops and presentations.
Current stand-out trends in the sector include virtual reality and the increasingly important experience economy. Bas Bakkers, International Manager Leisure at Coca-Cola, spoke to us about this concept, defining it as “one step further in the service economy”, whereby parks want to create emotional bonds with visitors to develop greater loyalty and provide better entertainment. What’s more, the different presentations were equipped with simultaneous interpretation services from Spanish and English, and the presentation “The Experience Economy: What’s Next” also had a sign-language interpreter which was required by one of the attendees.
When we talk about combining a unique experience with education, we can refer to the concept of edutainment, in other words a blend of education and entertainment that we’re going to look at in more detail.
The presentation “The A to Z of B2B” brought together speakers such as Sandro Chiocchi from Cinecittà World (Italy), Richard Huguet from Legoland (Spain) and Ann-Marie Pendrill from Lund University (Sweden). We also had the pleasure of listening to Maria Florensa, Marketing Director of Tibidabo, who presented the range of educational and leisure options at the famous Barcelona theme park. We wanted to talk to Maria Florensa about the use of the Anglicism “edutainment” in Spanish in order to find a solution for its translation, the challenge lying in finding a single word which can convey the same concept in Spanish.
When asked about the suggestion ‘eduversión’ (a combination of the Spanish words ‘educación’ and ‘diversión’), Florensa agrees that “it’s the word which fits best with the Spanish language, given that the more literal translations ‘educatretenimiento’, ‘educatenimiento’ and ‘edutenimiento’ (combinations of ‘educación’ and ‘entretenimiento’) don’t sound the same in Spanish. The objective is getting the message across that it’s a combination of education and entertainment. In general, this can be done through methods and types of education which incorporate elements of entertainment to improve the learning process.”
When applying this concept to Tibidabo, Florensa has no doubt as to what its objective should be: “In our case, and from the point of view of a theme park, we want people to have great experiences, enjoy themselves and be entertained. But why not allow them to enjoy themselves whilst learning new concepts? Plus, why not make the most of the possibilities offered by theme parks to teach pupils about physics or science? To reflect this perspective, since 2008 Tibidabo Amusement Park has offered an educational programme designed for schools where pupils can experience first-hand the Law of Gravity and understand the concepts that have been explained in class or textbooks in a unique and fun way.”
It’s clear that Tibidabo Amusement Park has committed to this union of entertainment and education, as Florensa further explains: “education is one of the strategic tenets of Tibidabo Park, and therefore we have not only created a programme of educational activities intended for schools, but indeed many of the attractions were designed with the purpose of being educational. Examples of this are Tibicity, an attraction to learn about road safety, and Creatibi from LEGOEducation, where visitors can learn 21st century skills including leadership, teamwork and communication.”
To conclude her reflections on the concept of edutainment, Maria Florensa emphasises another of the park’s objectives: “We want visitors to remember us not only as a park where they have really enjoyed themselves but also as a place where they learned about concepts they’ll now never forget.”
Thanks to the example of edutainment and its translation into Spanish, we can see how the theme park sector is strengthening its presence and importance in non-Anglophone countries, and this is also reflected in the language. Although we cannot forget that theme parks began gaining popularity in the United States, it is evident that today, renowned European parks are more than a match for those on other continents. One park worth a special mention is the most famous in southern Europe, PortAventura World Parks & Resort, which in just a few years has become an internationally-renowned holiday destination, offering three theme parks in a single resort.
People from Italy and Spain call rollercoasters “montañas rusas” (literally: Russian mountains) whilst Russians call them “American mountains”, but if one thing is clear across all continents it’s that theme parks are true oases of entertainment that bring together a multitude of worlds and cultures. Now, education is the newest addition to the range of services provided by these parks to offer an even more appealing and wide-ranging experience.
Photo: @miff32