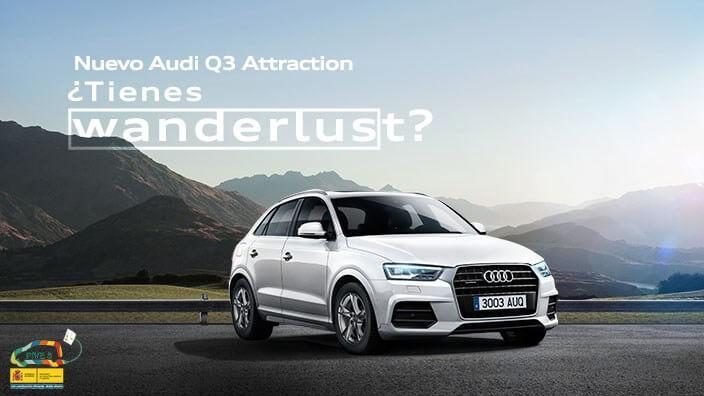 Ignacio González, Director of Communications and International Relations at Audi España, speaks to BBL Translation about the language of its latest marketing campaign

In its new campaign for the Audi Q3, Audi focuses on a German concept that cannot be directly rendered into the Spanish language: Wanderlust. The meaning can only be expressed as a “passion for travel/pressing need to discover new things / irrepressible desire to squeeze as much as possible out of the world”, something the German language can concentrate into one word. Why did Audi choose to use a German word in its Spanish marketing? To find out, we spoke with Ignacio González, Director of Communications and International Relations at Audi España.
-What intentions did you convey to the communications agency in Spain responsible for this campaign?
– The Audi Q3 is one of our great successes, not only because it’s a great product but because it represents a lifestyle. With this campaign, the goal was just to focus on the essence of this car and also its target audience: modern, open, designed to make the most of any time and any experience. For this reason we decided to address this campaign as an outlook on life rather than traditional car advertising filled with detailed descriptions of technological attribute. What we wanted and we believe that we have succeeded, was mostly to connect with potential Audi Q3 drivers, to be part of their lives and their aspirations.
-How do you think the use of this German word and concept within a Spanish campaign has paid off?
-This campaign speaks of an attitude towards life that the Audi Q3 represents perfectly. The fact that we found a word that clearly expresses this attitude is what makes the campaign effective. Particularly because it is an impossible word to translate not only into Spanish but also in other languages ​​and this affords the word a certain charm. In fact, in this sense we detected a consistent trend in finding words from other languages that cannot be translated literally and for this reason they attract a lot of attention from writers and artists. Wanderlust is just one of these words and it is becoming a buzzword amongst a cosmopolitan and modern target market: there are festivals, songs and movies that use it because it expresses a very current attitude.
As a German word it certainly holds added value for us (the German language contains many words that are impossible to translate) because it is in the DNA of our brand and can help the consumer to make that connection between communication and product. Clearly we weren’t expecting everyone to understand its meaning, what we wanted to convey is that there is a culture that has a special word to express the desire to discover new things, and that culture is the Audi culture. So we believe that it all fits together perfectly.
-Is this a strategy that you intend to follow in other countries?
-Audi is a global brand that is aimed at a particularly well-cultured target market of individuals that travel, speak different languages ​​and are interested in and open to other cultures. For this reason it is common to use global campaigns or campaigns designed in other countries. In this case it was the opposite way round: this campaign is 100% Spanish, but some European markets have used it and others are considering the possibility of using it.
-Have you seen a trend in advertising to insert own words into campaigns in other countries?
-There is a general tendency to create global communications clearly due to a matter of resources, but also to build large global brands that are aimed at a target market that moves, travels, changes country … And in this sense often foreign words are used to transmit this internationality. At the same time more value is given to authenticity and the local dimension of brands to really connect with people. In this sense, the use of a foreign word can also help to affirm the origin of the brand.
Despite being immensely proud of both our German DNA and our international dimension, we don’t tend to use foreign words because we believe in a local and direct approach to communication, in the value of being able to speak the language of our audience and still have a global vision. But sometimes creativity forces us, fortunately, to break the rules and use foreign words, especially when, as in this case, they cannot be translated literally and represent much more than a single word.